Abyssinian Cats are one of the oldest breeds that exist today. Abyssinian, a breed of domestic cat, probably of Egyptian origin, has been considered to approximate the sacred cat of ancient Egypt more closely than any other living cat.

The cats are known for being very playful, friendly, outgoing, athletic, and intelligent. They make good pets for families with kids or other pets. 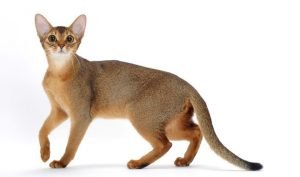 The Abyssinian is a lithe cat with relatively slender legs and a long, tapering tail. The head is long and flat with small ears. The eyes are large, round, and widely separated. There are a variety of coat patterns in this breed which gives them their unique look. Their fur is short except on the tail where it is longer giving it a “tassel” appearance.

Abyssinians come the short, finely textured coat is ruddy reddish-brown, with individual hairs of the back, sides, chest, and tail distinctively ticked, or tipped, with bands of black or brown. The nose is red, the eyes are hazel, green, or gold, and the tail tip and backs of the hindlegs are black.

Abyssinians generally weigh anywhere from 6 to 12 pounds. They average between 13 and 20 inches long.  Abyssinians are generally healthy and hardy cats. They usually live between 12 to 15 years. Abyssinian Cats have an average litter size of 3-4 kittens per litter.

What is the personality of the cat?

The Abyssinian Cats are very active, curious, mischievous, and clever with a great love for play with a unique ability to entertain themselves. This is a very friendly and affectionate breed that thrives on human companionship and loves being the center of attention.

They are also very intelligent and easy to train to perform well in agility type of activities. They get along well with other pets as well as children if they are introduced to them at an early age.

Abyssinian Cats are very similar to dogs in their loyalty and love for their owners. This highly intelligent breed needs a lot of mental stimulation with plenty of toys as well as playtime.

How to care for Abyssinian Cats?

They are one of the easiest cats to care for due to their short hair coat that doesn’t tend to mat or tangle, although occasionally, they need a brush. They don’t have an unpleasant odor and require minimal grooming.

Abyssinian Cats are very adaptable to almost any living condition and will do okay in an apartment if it is sufficiently active with lots of playrooms. Their activity level generally depends on the person they spend their time with most, which may be another cat or their owners.

Are there any Behavioral Problems associated with Abyssinian cats?

Abyssinian cats are very adaptable to almost any living condition and will do okay in an apartment if it is sufficiently active with lots of playrooms. Their activity level generally depends on the person they spend their time with most, which may be another cat or their owners.

Are Abyssinians good as pets?

They are known for being very playful, friendly, outgoing, athletic, and intelligent. They make good pets for families with kids or other pets.

Abyssinians are one of the most popular cat breeds. It has been claimed by breeders that their kittens have sold as soon as they are weaned, and a breeding record exceeded 1,000 sales in a year.

There is one thing that you must keep in mind before buying an Abyssinian Cat. These cats are very sensitive to heat and sun exposure. So, you should never leave them out in the sun or outside for too long.

If these precautions are taken care of then this breed would be a great addition to your family!

Does Abyssinian Cats get along with dogs?

Yes, Abyssinian Cats can get along well with dogs and other cats if they are introduced to them at an early age.

Abyssinians are very friendly felines and being very active, they tend to get along with other animals. If you have a dog, he will probably try to play with your cat. Dogs and cats usually bring out the best in each other by encouraging them to play chase, hunt, romp, wrestle and explore new places.

Does Abyssinian Cats get along with other Cats?

Yes, Abyssinian Cats can get along well with other cats if they are introduced to each other in the right way.

Abyssinians are very friendly felines and being very active, they tend to get along with cats. If your cat is a senior or you have another feline as a pet, then having a young energetic cat can be very beneficial.

Does Abyssinian Cats get along with toddlers?

Abyssinians are very gentle and affectionate by nature, so they have no problems in getting along with children.

Yes, Abyssinians do get along well with children that have been taught how to be gentle and respectful around cats. This breed loves spending time with their owners and being the center of attention when they receive love and affection.

What Should I feed to my Abyssinian Cat?

Nutrition is equally important as one needs to provide their pet with the right kind of food. Abyssinian Cats are very active and should be fed quality cat food which is rich in nutrition.  Find out more about Cat Food Nutrition on this page!

A healthy diet contains good proteins, so it is advised that you give your feline friend high-quality wet food. This type of cat food has a higher percentage of moisture – about 70%. However, dry kibble should also be provided to cats as it can help remove plaque from their teeth and massage the gums!

There are also many cats’ food brands out there that claim to be specially formulated for kittens. However, you should know that you can feed your Abyssinian Cat adult kibble as well! It is always important to check the nutritional content of foods before feeding them to your pets.

There are several diseases that your Abyssinian Cat could suffer from. One of the most common is feline lower urinary tract disease (FLUTD).

This is usually caused by stress in cats, and these animals tend to develop bladder infections due to this reason. Another problem your pet would face is obesity – which can be prevented if you give your feline friend a healthy, quality diet.

Abyssinians are one of the most loved cats on this planet and for good reason, they are somewhat divas at times, but they will love you unconditionally!

Do you want to have an Abyssinian Cat?

If so, then there is no problem in that as these cats are not only adorable, but they also make great companions. It is not that difficult to take care of an Abyssinian Cat, it will be a fun experience for you and your feline friend!

Some Facts about Abyssinian Cats

If you are planning on getting an Abyssinian Cat, then here are some interesting facts you should know!

If you are looking for a unique breed of cat, Abyssinians may be just what you need. These cats look like something out of ancient Egypt, and they come in three different coat types: ticked, agouti or spotted. They also have thin whiskers that can often bend or curve. Let us know if you want to find an Abyssinian Cat today!